FREE UK DELIVERY ON ORDERS OVER £40

Are UV tests enough for a sun protection claim?

Sun care manufacturers are innovating to prevent the ageing effect of blue light on the skin? But how do we prove the efficacy of such products?

Blue light, emitted by computer screens and smartphones, not only impairs our vision but also causes skin ageing. This is being accentuated by our 24/7 connected lifestyles – and people of all ages worldwide are affected. It is a universal problem, which is of concern to the cosmetics industry and which some suppliers of active ingredients are already integrating into their proposals.

In most markets, research for anti-ageing formulas to protect the skin against the harmful effects of exposure remains one of the main axes of work. While anti-pollution innovation has been widely publicised, protection against the rays of the light spectrum (including UV) remains the limelight of the market, with more than 800 new anti-ageing products launched during the last 12 months. The need to protect against UVA, UVB and infrared radiation is compounded by a new ubiquitous inflammation factor, from which the skin must be preserved: blue light.

WHAT IS BLUE LIGHT?

The sun emits light with an enormous amount of energy including gamma rays, x-rays, UVC, UVB, UVA, visible radiation and infrared radiation. All the high-energy (short wavelength) sections, such as gamma rays and x-rays are reflected or absorbed by the atmosphere that envelops the planet. Hence, they do not reach the earth’s surface. All the UVC (100-280nm) are absorbed by the ozone layer. Approximately 0.1% of UVB (280-315nm) and 5% of UVA (315-400nm) reaches the earth’s surface; and 39% of visible radiation (400-780nm) and 56% of infrared light (light beyond 780nm) reaches the earth surface.

WHERE DOES BLUE LIGHT COME FROM?

Blue light occurs both naturally and from man-made devices. However, to be able to protect oneself efficiently, one needs to know the real source of blue light

Solar irradiation is the main source of blue light. It is part of the visible spectrum. However, blue light can also occur artificially. It is an elemental constituent of LED (light emitting diode) bulbs: a combination of the shorter blue wavelength and yellow luminophores to create white light. The use of white LEDs has expanded exponentially in recent years, with their usage in low-energy bulbs, computers, smartphones, televisions, etc increasing.

The main concern about blue light is its radiation intensity and energetic charge, which is higher than normal white light. It has been shown that blue light may have serious detrimental effects on the retina and ocular lens. The ANSES, the French National Agency for Sanitary Safety of Food, Environment and Labour, published a report in 2010 to alert consumers about the dangers of intensive exposure to blue light.

Human skin (especially on the face and the hands) is constantly exposed to external stresses, mainly from solar irradiation.

Digital pollution has also recently been called into question.

Keratinocytes are very sensitive to blue light. In the presence of blue light, keratinocytes produce superoxide anions (O2•−), which are responsible for the alteration of skin characteristics. The skin’s defensive action to such stress results in the production of enzymes know as superoxide dismutase (SOD), which neutralise the superoxide ions and transform them into less harmful products. However, as we grow older, the rate of production of SOD gradually decreases and we become more sensitive to blue light and its negative impact on the skin.

With the rapid rise in technology and digitalising, the dangers of blue light are becoming more obvious. Cosmetics brands have recognised this as a big opportunity to gain a competitive edge over their counterparts. Indeed, many brands are developing innovative active ingredients to protect the skin against blue light-induced cutaneous damage.

THE EFFECTS OF BLUE LIGHT

Until very recently, scientists have mainly focused on the detrimental impact of UVB and UVA on the skin and methods of protection. This is why most sunscreens mostly contain filters that protect the skin against UVB and UVA only. The determination of the sun protection factor (SPF) and the UVA protection factor (UVA-PF) are the two main efficacy tests carried out on sunscreen products before they are marketed. Cosmetic brands also put the claim ‘broad spectrum protection’ or ‘full spectrum protection’ on products that protect in the UVA and UVB regions. However, in the past decade, many scientists have shown that, beyond UVA and UVB, other sections of the solar spectrum, mainly blue light, have cutaneous pigmentation and cutaneous ageing effects[1,2,3].

So, the main question today is whether we need to add specific filters to prevent blue light from reaching the skin, thereby preventing skin deterioration due to blue light? In fact, many laboratories are already marketing products with blue light, or high-energy visible light protection claims. During the most recent Sun Protection Conference, held in June 2017, in London, various presentations demonstrated the effects of blue light and infrared light on skin ageing, skin pigmentation and DNA damage.

This really fits when we look at the solar spectrum reaching the earth surface.

Furthermore, when we consider various publications on the penetration of light into the skin, we can deduce that blue light penetrates far deeper into the skin compared with UV light. 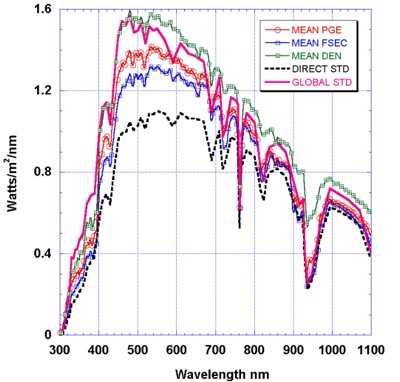 AN INNOVATIVE PROTOCOL TO SUBSTANTIATE CLAIMS

As an innovative and proactive CRO, CIDP is one of the first CROs to propose standard in vitro, ex vivo and in vivoprotocols to substantiate the blue light protection claim.

CIDP has set up monochromatic blue light sources at 410nm and 452nm, and investigated the effect of these lights on skin ageing and skin pigmentation. The in vitro results on human skin fibroblasts and ex vivo results on skin explants have shown that blue light induces an increase in the production of ROS, MMP-1 and MDA. During the in vivo studies, CIDP investigated blue light-induced pigmentation by measuring ITA and L parameters from the chromameter CR-400, before and after exposure to blue light. Conclusive results were obtained, showing that blue light (mainly the 410nm light source) has a significant skin pigmentation effect and this pigmentation effect is long lasting.

The chronological table below briefly summarises the history of sunscreen over the last century and shows how our interest shifted from solar heat to UV light, then to UVB light, which is mainly responsible for sunburn and UVA, which is responsible for skin ageing and pigmentation. 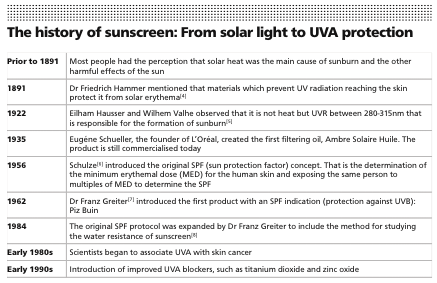 THE EUROPEAN COMMISSION RESTRICTS USE OF O-PHENYLPHENOL
10th December 2018